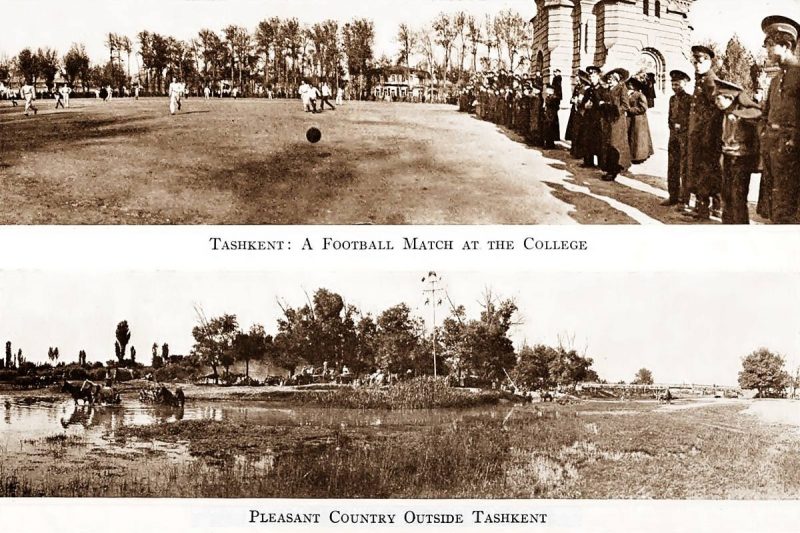 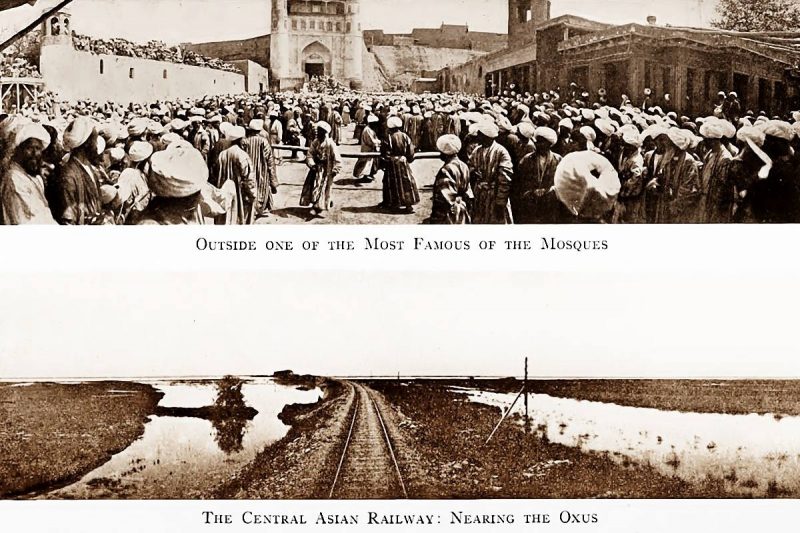 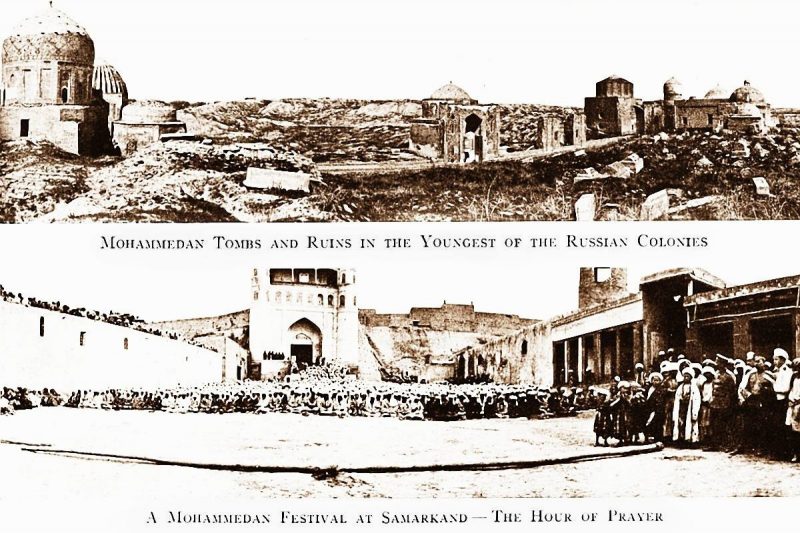 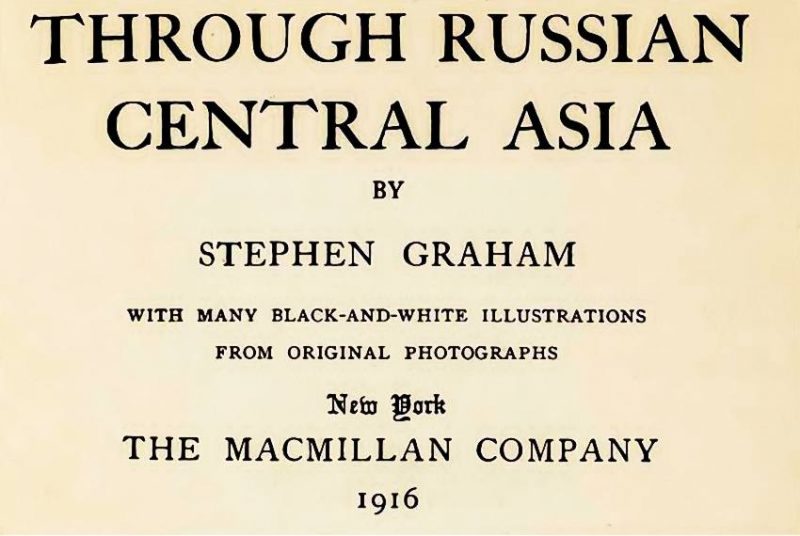 TASHKENT
Russia, stopped in the Far East by the emergence of modern Japan, and thwarted in the Balkans, seemed in the time just before the Great War to be concentrating her attention on what may be called the Middle East. How open Europe is becoming to the East, and how easy of access is the East becoming to us! The friendship of English and Russians in Central Asia must mean a larger, stronger life for both Empires. And the development of Asia can mean much to the home Russians; they, as we, are inclined to take their own land and their capital cities as the only places of interest in the world.

Already, reading some of the Moscow and Petersburg newspapers, you may alter Kipling’s phrase andask: «What do they know of Russia who only Moscow know ? »

Tashkent is the capital of Russian Central Asia, and is a well-built city extending over an enormous area. It occupies a space something like a fifth of that which London occupies. There is no crowding anywhere. The houses, for fear of earthquakes, have in no case more than two storeys, and seldom that.

There are many public gardens, where you may sitat white-spread tables and drink narzan or koumis in the dense shade of thickly foliaged trees. Tashkent is a city on an oasis. It has wonderful vegetation. Along all the streets run brisk streams of fresh water, conducted on the irrigation system from the river.

There is a noise all day and all night of running water, so that if you wake in the hush of night and listen to it, you may imagine for a moment that you are living in a village among hills aleak with thousands of cascades and rivulets. How useful is this water supply to Tashkent! There is no need for watercarts; strong natives are employed with buckets to scoop water from the streams and fling it across the cobbles all day. So effectual is their work that there is never a whiff of dust, and, indeed, it is occasionally necessary to wear galoshes, the streets having been made so muddy. The streams freshen the air, keep down the dust, give life to the lofty poplars of the many avenues, and they are the convenient element for thousands of Mohammedans to wash in before saying their prayers. The streams make the town into the country. As you walk down the pavemented High Street, and look in at the truly fine shops of Tashkent, your attention may still be diverted by the dainty water wagtail that is nesting near by, and as you wait for the electric tram you observe the small heath butterfly flitting along, as much at home as upon the mountains. At night, whilst all the Russians, in white clothes, parade up and down and gossip, and the moon looks down from above the gigantic trees of the gardens and the main streets, the streams still take attention, for there proceeds from them a tumultuous, everlasting, raging chorus of frog-calling.

Up the many long streets from the old town to the new come strings of gentle-looking camels — low-backed, single-humped, long-necked camels, with sometimes as many as twenty necklaces of blue beads from below their ears. The horses, too, are much adorned with carpet cloths and coloured strings that keep the flies away. The high-wheeled carts of Bokhara have become too common in Tashkent to attract attention. Altogether, indeed, the Orient strikes one less romantically here than in Bokhara. The native population of 200,000 is very dirty and disorderly; the women, behind their veils, not nearly so strict or socareful; the houses not so well kept — all in dirt and ruin. On the roofs of the mosques are thousands of red poppies in bloom, and occasionally the crane’s nest is to be seen on the tops of the towers whence the muezzin calls to prayer. There are booths of coppersmiths and carpet-makers and silk-workers, and caravanserai where all manner of picturesque Moslems are to be seen lying on divans and carpets or squatting over basins of tea; but all is second-hand and downat-heel after Bokhara. With the coming of the Russians the angel of death has breathed on all that was once the grandeur of the Orient at Tashkent. Once there were no Russians in the land, and then what is now old Tashkent was the only Tashkent; it was a great Moslem city that could be pointed to geographically as such. But as the fine Russian streets were laid down, and the large shops opened, and the cathedrals were built, and the gardens laid out, the old uphill-and-down-dale labyrinth of the Eastern city slowly changed to a curiosity and an anachronism. It faded before the eyes. The next year the Russians were to celebrate the fiftieth anniversary of the conquest of the town — only the fiftieth!

Poor old Tashkent, slipping into the sere and yellow leaf, passing away even as one looked, always decreasing whilst the new town is always increasing — there is much pathos in its destiny.

The natives are mostly Sarts, an absolutely unambitious people, honest, quiet, sober. Scarcely any crime ever takes place among them. A week in the year they are said to go off on a spree and get rid of the sin in them. For the rest of the time they are like lambs. They are uninterested in everything except small deals in the wares they make or sell. Their wives have rings in their nostrils for adornment — so I observed when the sun shone brightly on their black veils. A strange sight the electric tram which goes from the old town to the new and back again — crowded with men in white turbans and long robes and with Eastern women in their veils.

The foundation of the society of new Tashkent is laid by the regiments quartered there, and the fine shops exist chiefly for the custom of officers and their wives.
A Grand Duke, who was banished for giving a Crown jewel to a favourite lady, lives here in exile, but he is an aged man now and receives few guests. High official personages constantly visit the colony, and consequently stay at Tashkent. The whole atmosphere is military, and there is an unusual smartness
everywhere. Especially do you notice how well dressed the women are at the theatres and in the gardens, and the men accompanying them nearly all wear the sword. The middle-class Russian is out of sight, and the peasant labourer is rare, owing to the fact that the Sarts work at 9d. a day, but the Russian at is. or is. 3d. There is, however, a dandy Armenian element; young hawkers and shoeblacks and barbers who appear in the evening in white collars and cheap serges, with combed locks under felt hats, with canes in their hands.

Tashkent has now many schools, from the important Corpus, the military college where officers’ sons are educated, to the little native school where the Russian schoolmaster tries to give Russian to the Sart. I visited the splendid military school, and was only sorry to be too late in the season to see an hour of Russian football, the game being very popular with the boys. Most of the professors at this school are officers, and I met a charming staff-captain who had
known several English correspondents during the war in Manchuria. The teacher of French gave me some interesting photographs.

There are six cinema shows at Tashkent, two theatres, an open-air theatre, a skating rink, and many small diversions. The native turns up in the cinema, and there are generally long lines of turbaned figures in the front of the theatre. At the real theatres it is necessarily those who know Russian who take the seats. At the open-air theatre they play The Taming of the Shrew, at the Coliseum the Doll’s House and Artsibasheff’s Jealousy. The town has two newspapers, and on the day on which I arrived I found that the leading article of the Courier of Turkestan was entitled «The State of Affairs in Ulster.» All Europe seemed to have its eyes on our politics, and Europe extends now as far east as Tashkent, though it is of » Central Asia» that that city claims to be the capital.

A wonderful place Tashkent. Cherries ripen there by the ist of May, strawberries are seven copecks a pound in mid-May. Everything ripens three weeks earlier than in Russia proper. It is a fresh, fragrant city — an interesting curiosity among the cities of the world. The Russians have in it a city worth possessing. It must be said they have done their best to possess it, not merely in the letter of the law, but by improving it and governing it and giving it a Russian atmosphere. Despite camels and mosques, and natives in their turbans, and the sad call of the muezzin, you feel all the time as you go up and down the streets of Tashkent that you are in Russia.